Carpet weavers from a rural village in Morocco used driftwood they gathered from the banks of the Mississippi River to build large wooden looms in New Orleans – their first stop on a U.S. tour demonstrating the craft of their North African homeland.

Two weavers from the Valley of the Roses had never been outside Morocco before arriving in New Orleans last week to share weaving techniques with locals interested in the ancient Berber art.

Through a translator, the women discussed the importance of carpets in daily Moroccan life. In the country’s rural areas, thick carpets woven for warmth and comfort often are the only furniture. Their manufacture also is a source of family income.

“Carpets in Morocco are not just floor decoration,” said Terra Fuller, a U.S. weaver originally from Thibodaux, La., who helped arrange the women’s visit to America. “In Morocco, the carpets represent the home and the nurturing of the family. They represent security and the role of women in the family.”

In villages outside Casablanca and other major cities in Morocco, carpets often serve as a family’s bed or table or chairs, Fuller said. They are dyed in bright shades of blue, orange and red and contain tribal symbols and abstract geometric designs that can represent femininity and childbearing.

“It’s the centerpiece of the room,” Fuller said of the carpets. “Everything in the house is earthen, a terracotta brown, from the oven to the walls to the floors. You walk into a room that’s all terracotta brown and then you have this bright carpet on the ground. It’s the main visual display.”

In the Moroccan villages, women often gather wood and materials from fields to build looms on which they knot and thread the fabric. So when they arrived in New Orleans, the weavers – along with a handful of locals – gathered wood from the riverbank and abandoned buildings to build four looms approximately 5 feet tall and wide.

Fuller said the group was given special permission to mine demolition sites for materials to make the looms. They also used fabric from recycled clothes and thread from worn sweaters.

“Back in their villages, the women would have used all recycled materials,” Fuller said. “Very rarely do they go out and buy things. They mostly use old clothes, old scarves, even old wedding dresses. They will use natural dyes and handspun wool from their livestock.”

The weaving techniques stem from the Berber culture that stretches back more than 3,000 years in North Africa and is distinct from the Arabic culture and language.

Mouhou Boussine, one of the Moroccan weavers, is in her 70s and has been weaving carpets for most of her life after learning the techniques from her mother.

“It’s a skill transfer,” Boussine said through a translator. “I learned it since I was young, and when I grew up, I taught also my daughters and many women also in the village.”

Boussine serves as president of Association Assif, which is made up of carpet weavers in rural southern Morocco. She has traveled all over Morocco to sell association members’ carpets and teach workshops.

Stops on the tour also include the Santa Fe International Folk Art Market in New Mexico, Boston and Nevada Mills, Ind., where the women will stay on a rural farm and hold stitching and quilting exchanges with local women.

It takes a month or two to make a carpet, including the gathering and dying of the materials. It’s a very social activity. Women talk as they weave and will often help each other out.

“A carpet is usually started by one woman and several women will contribute to it by the end. It’s interesting because you can see the different hands in one carpet. It’s almost like drawings,” Fuller said. 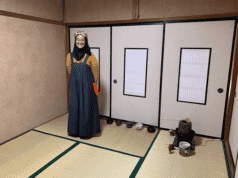 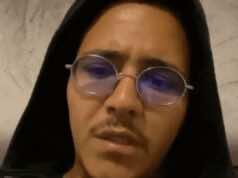 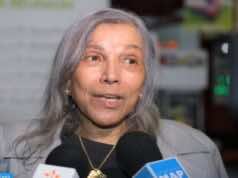 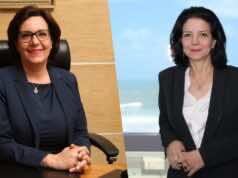 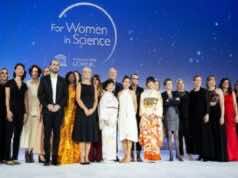 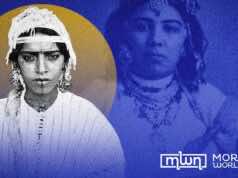