Rabat - King Mohammed VI of Morocco is due to pay on official visit to the United Arab of Emirates, on Monday.

Rabat – King Mohammed VI of Morocco is due to pay on official visit to the United Arab of Emirates, on Monday.

Multiple Moroccan media outlets said that the Moroccan monarch will fly to UAE from France, after attending the opening of the climate summit (COP21)  in Paris on Monday.

During his upcoming visit to EAU, King Mohammed VI is expected to lead an important delegation composed of a number of ministers.

Several agreements have been previously arranged to be signed during this visit with the aim of boosting the Moroccan-Emirati partnerships.

King Mohammed VI has been on a private visit to Paris for a period of convalescence. On November 10, the personal physician of the monarch prescribed a suspension of the sovereign’s activities for 10 to 15 days after the monarch contracted a severe flu syndrome during his visit to India. 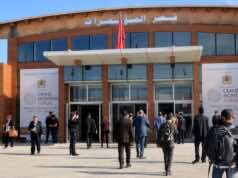